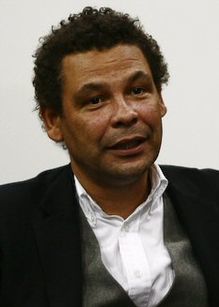 Craig in 2009
"My life has been, I suppose, the most incredible series of highs and lows."
Advertisement:

Craig Joseph Charles (born 11 July 1964 in Liverpool, England) is a British actor (a Scouser to be exact) most famous for his portrayal of Dave Lister in Red Dwarf. Charles was also the UK host of Robot Wars (apart from the first series, which featured Jeremy Clarkson, and the 2016-on reboot, which is hosted by Dara Ó Briain) and the narrator of the Gag Dub-like commentary for Takeshi's Castle in the UK. Also appeared in a short Channel 4 Sitcom about pirates as the title character Captain Butler. Between 2005 and 2015, he played Lloyd Mullaney in the long running Soap Opera Coronation Street before leaving it to return to Red Dwarf again for Series X.

In addition to acting and presenting, Charles is involved with other entertainment pursuits. Before establishing his acting career with Red Dwarf, he was best known in the UK for his punk-style performance poetry, and regularly made appearances on British television and radio during the 1980s. He has also been the host of BBC Radio 6's Craig Charles Funk and Soul Show since 2002.