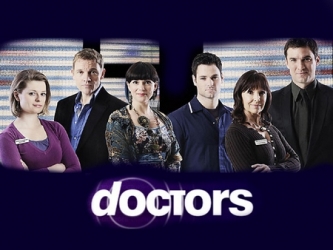 Doctors is a British daytime Soap Opera set in a doctors' surgery, which has aired on BBC One since 26 March 2000. It is set in the fictional Birmingham suburb of Letherbridge.

The setting of a GP's practice means that the series cast is based around 4 or 5 doctors, a nurse and a reception. The actual characters have had a fairly high turnover with most of the current cast only having a 1 or 2 year history on the show but the size of the cast keeps it to a similar sort of format with Two Lines, No Waiting for one line of plot dealing with some interpersonal problems between the doctors and another plot line often dealing with some Patient of the Week. These latter plot lines often opened themselves up for some topical issue taking up the headlines.

This show has examples of