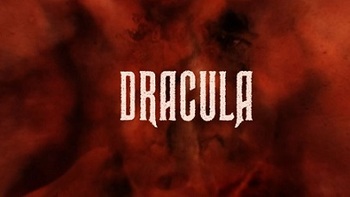 A BBC miniseries, consisting of 3 episodes of 1.5 hours each, developed by Mark Gatiss and Steven Moffat. Based on the novel of the same name by Bram Stoker, though the story takes a lot of liberties with the source material. It was released on Netflix on January 4, 2020.

This series follows Dracula from his origins in Eastern Europe to his battles with Van Helsing's descendants and beyond. Netflix's description reads: "The Count Dracula legend transforms with new tales that flesh out the vampire's gory crimes—and bring his vulnerability into the light."

A to G
H to Z
Feedback

For Dracula's victims, becoming undead but not a vampire can be particularly gruesome.

For Dracula's victims, becoming undead but not a vampire can be particularly gruesome.