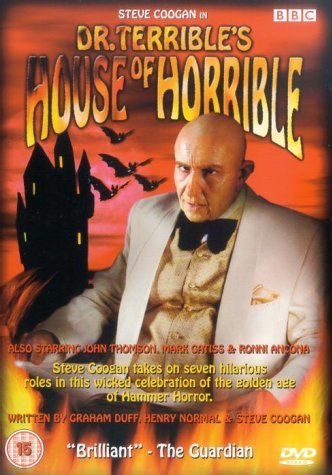 An Affectionate Parody of Horror tropes, Doctor Terrible's House Of Horrible was a six-episode series created by Graham Duff and co-written by Steve Coogan for The BBC in 2001. In Horror Anthology style, each episode is introduced by Doctor Terrible (Coogan in heavy makeup) and then proceeds with the week's tale, where the main character will be played by Steve Coogan, the episode then concluding with a skewed moral message, more-or-less completely unrelated to the events of the tale, delivered by Doctor Terrible (Coogan again).

People other than Steve Coogan were involved, naturally. Aside from a grab-bag of British comedy talents (Mark Gatiss, Simon Pegg, Ronni Ancona, and John Thompson, among others) hamming it up with all their might, veterans of the very productions being lampooned leant their talents - Honor Blackman, Graham Crowden, and Angela Pleasance all appear.

Each episode is an Affectionate Parody of a particular subgenre or house style; for example, the episode "And Now the Fearing..." riffs on the anthology horror films of Amicus Productions. Amicus is also the source of the series title; the first of its anthologies was titled Dr. Terror's House of Horrors.

Viewing figures fell short of expectations - the humour is both dark and very silly, which tends to induce Mood Whiplash on first viewing - and the BBC opted not to order a second series. If, like many fans, you find that the series improves with repeated viewings, you will just have to reconcile yourself to the fact that six episodes is all you're ever going to get. For the uninitiated, they are: