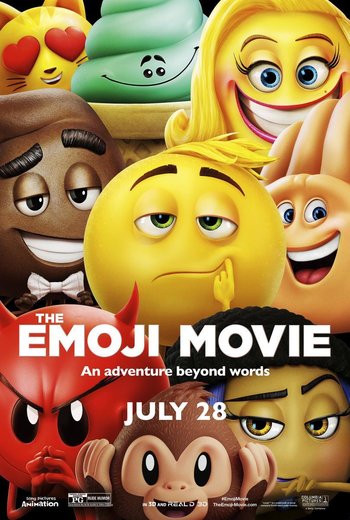 "The world we live in, it's so wonderous, mysterious, even magical. (...) The smartphone. Each system and programmed app is its own little planet of perfect technology. All providing services so necessary, so crucial, so unbelievably profound."
— Gene's Opening Narration
Advertisement:

The Emoji Movie is a 3D CGI film produced by Sony Pictures Animation and distributed by Columbia Pictures, released on July 28, 2017 (originally set for August 4th). It is the second theatrical film to be directed by Tony Leondis (known for Igor and the direct-to-video Lilo & Stitch 2: Stitch Has a Glitch). The film centers largely around the emojis in cell phones.

The film's setting is inside the core of a teenager's smartphone. One of the smartphone's residents is Gene (T.J. Miller), a "meh" emoji who discovers he has the ability to make multiple expressions, an ability that no other emoji has and one that proves to be dangerous to the entire smartphone. Destined to fit in with the rest of the emojis, he teams up with his friend Hi-Five (James Corden) and ends up on an adventure of a lifetime alongside the rebellious Jailbreak (Anna Faris), blazing through various smartphone apps and meeting other emojis along the way to discover his meaning.

It was first revealed under the working title Emojimovie: Express Yourself at CinemaCon 2016, a year after Sony won the rights to develop a movie based off the emojis. The teaser trailer can be viewed here

. The first official trailer can be viewed here

, and the second can be viewed here

The Emoji Movie provides examples of:

open/close all folders
Tropes A to H
Tropes I to Z
Advertisement:
And remember kids, words aren't cool.