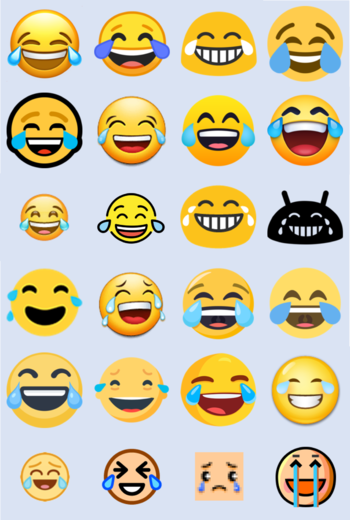 The infamous "Face with Tears of Joy" emoji as seen in various setsnote L-R, top-bottom: Apple iOS; Android Oreo/Pie; Android Nougat; Twitter Twemoji; Microsoft Windows 10 since 2016; Samsung Galaxy Experience/One UI; JoyPixels 5.0; Facebook as of 2018; WhatsApp; OpenMoji; Android KitKat/Lollipop/Marshmallow; Android Jelly Bean; Microsoft Windows before 2016; Samsung Galaxy Touchwiz; JoyPixels 3.1; JoyPixels 2.2; Facebook before 2018; Firefox Emoji; Facebook Messenger; LG; HTC; Softbank 2014; Softbank before 2008; au by KDDI. The latter seven sets have been discontinued.
Advertisement:
"And, as the pace of life gets faster and faster...and attention spans get shorter and shorter and... (You're probably not even listening to me right now.) Who has the time to type out actual words? And that's where we come in, the most important invention in the history of communication... Emojis!"
—Gene, The Emoji Movie

Emojis are one-character pictures used to convey a wide range of emotions, people, things, and locations. The word comes from Japanese e ("picture") + moji ("character"), and its resemblance to the English word "emotion" is a total coincidence.

Emojis started becoming popular in Japan in 1999 as a simpler way to send emoticons over smartphones. Apple started supporting emojis in 2008 for Japanese users only and 2011 for the rest of the world, and two years later Android and Windows followed suit. Emojis quickly became the trendiest way to send pictures as text.

The Unicode Consortium is responsible for approving new emojis, and different platforms decide how they will render each one (see right). Every year Unicode approves a hundred or so new emojis. In 2015, Unicode added the option to change the skin tone of people emojis, and the group has pushed for adding emojis more representative of all the people who use them. For example, in 2019 Unicode announced the addition of emojis which represent different disabilities.

Emojis have the following tropes:

Emojis are used in the following works: