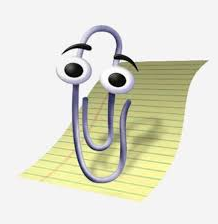 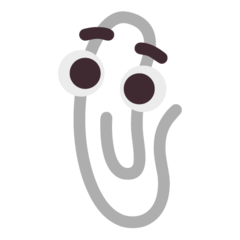 Would you like help with using emojis to express your frustration?
"Go away, you paperclip! No one likes you!"
—Stewie Griffin encountering Clippy while trying to hack a power grid, "Lois Kills Stewie"
Advertisement:

The (sort of ex-)Scrappy of Microsoft's business software history. A classic case of Unwanted Assistance.

Office Assistant was a feature of Microsoft's Office suite of programs between 1997 and 2004. When the software detected certain activities on the part of the user, it would pop up an animated figure which would note, via a dialogue box, that the user appeared to be attempting some specific task (such as writing a letter), and offer to "help with that". If the user said yes, the Assistant would walk the user through a process to accomplish that task. A number of different figures were available, but the default was a talking paperclip named Clippit — widely referred to as "Clippy" — and as most people stick with defaults, and anyway changing it usually required the installation CD or a venture into the depths of Microsoft's website, Clippy the Paperclip became largely synonymous with Office Assistant. The Other Wiki has a lot more detail.

), and some of the animations were kind of cute, but overall, the whole thing was a bit of a disaster. It just wasn't smart or helpful enough, especially after its first appearance for any given task, and the animations could soon become annoying; having Clippy pop up was just a distracting intrusion into people's serious work. The little sound effects attached to its appearances probably didn't help. You could turn it off, of course, but, well, most people stick with defaults — so they blamed Microsoft instead. Time Magazine listed Clippit as one of the fifty worst inventions of all time. Even Microsoft soon started mocking their own creation, with some staff claiming to have been against it from the start.

Clippy has appeared as an annoying or tragicomic figure in animations and comics, and will still be recognized by computer users whose memories go back to the turn of the millennium; the Assistant's Stock Phrases have featured in Memes created since the Assistant's demise. The Exposition Fairy is a similar feature in computer games.

Some appearances of the Paperclip in popular culture: