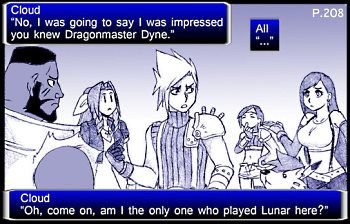 , make a Growlanser reference.
"Welcome to Julie Taymor's Playhouse. (beat) Like five of you got that, but the five of you who got it are gonna be laughing."
— Doug Walker (during his tour of Austria)
Advertisement:

When a reference or Shout-Out is made, and it's acknowledged In-Universe to be obscure.

This isn't done all the time. Sometimes obscure references are subtle, so that anyone who doesn't get them can just enjoy the show. Doing it once in a while can give the audience a bit of curiosity about the reference, but not slow down the show with them wondering about every single one.

This trope can be done by the lampshading character talking to other characters, or by the character Breaking the Fourth Wall.

A Sub-Trope of Genius Bonus.

See also "Not Making This Up" Disclaimer (when someone might not even think the reference is real).

Not to be confused with characters not getting a commonly known thing (unless it's meant to invert this).