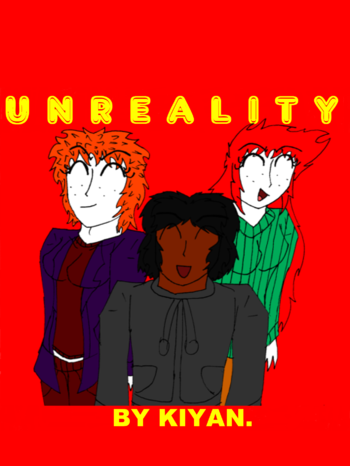 What a happy family!
Advertisement:

is a webcomic created by Kiyan Shahab. It started on November 19, 2017, and updated on an inconsistent yet frequent basis until Shahab announced its cancellation in 2019. Unreality is a slice-of-life comedy that centers around three teenagers living together in a recovering apocalyptic future.

The series takes place in the surprisingly nice post-apocalyptic year of 0377AE, and revolves around a Trio of teenagers,a jaded, overworked 18-year-old woman named Monica, Dominic, a rambunctious 14-year old boy who while not related to Monica by blood, is still unquestionably her brother, and Sarah, Dominic's cheerful and eccentric 16-year-old girlfriend. The series is a gag strip involving all sorts of humorous happenings the trio finds themselves in.

The comic is available to read on Tumblr

as well as on SmackJeeves

While the comic isn't necessarily NSFW, it does have a consistent air of lewdness throughout so be wary of that.