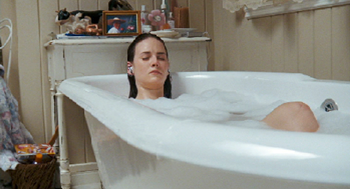 Nothing completes a nice relaxing soak like parasitic alien worms.
"Splish, splash
I was takin' a bath
Long about a Saturday night.
Rub-a-dub
Just relaxin' in the tub
Thinkin' everything was all right...."
— Bobby Darin
Advertisement:

One of the most simple forms of Fanservice is having an attractive character spend a small amount of screen time in the tub. Many films usually use this as an easy excuse for nudity. Even though they are not very necessary, bathtub scenes usually seem to sneak their way into many forms of media even though most of the time they're unnecessary to the plot. If they do advance the plot, that's often due to a deadly twist.

Can include candles and Censor Suds usually come in. This trope is a variation of the Shower Scene. See Furo Scene for the Japanese variation.

Also see the Bathing Tropes index for the many variants that can occur once someone gets in the tub.