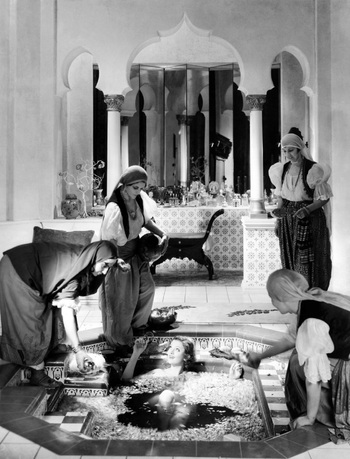 The Barbarian is a 1933 film directed by Sam Wood.

Diana Standing (Myrna Loy) is a tourist who comes to Egypt to marry her stuffed shirt fiancée, Gerald Hume. As she gets off the train, she is spied by a rascally Egyptian man, Jamil (Ramon Navarro). Jamil has a little racket in which he romances wealthy white ladies and winds up exchanging rings with them—naturally, the rings that he gives his lovers are costume jewelry. Jamil is enchanted by Diana's beauty, and worms his way into her circle as her tour guide ("dragoman").

Jamil puts the romantic full-court press on Diana, who is at the same time offended by his brashness and undeniably attracted to him. Eventually she fires him for sneaking his way into her boudoir and kissing her. Jamil doesn't give up, however, and infiltrates a caravan that Diana takes into the desert. There events take a darker turn.

Based on a stage play called The Arab although the film is actually quite similar to book and film The Sheik. C. Aubrey Smith plays Diana's uncle Cecil.