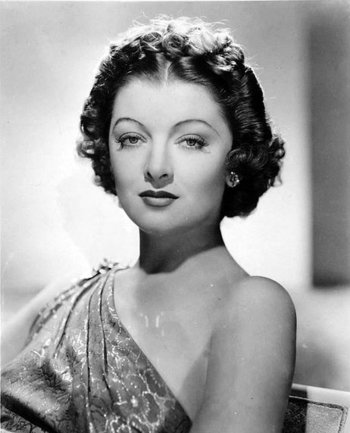 Myrna Loy (born Myrna Adele Williams; August 2, 1905 – December 14, 1993) was one of the greatest film actresses of The Pre-Code Era and The Golden Age of Hollywood. Over her 50-year career, she started out playing sexual temptresses, then moved on to wisecracking Screwball Comedy heroines, then played nurturing wives and mothers.

Loy was born in Helena, Montana, the daughter of ranchers. As a child, she took dancing lessons. When her father died in the influenza pandemic of 1918 her mother took the family to Southern California. By 1925 Loy started getting parts in silent films. Her exotic good looks often got her cast as The Vamp (and sometimes in Yellowface as well), and she continued to get such parts after making the transition to sound.

A career slump in the early '30s was turned around when Loy got the female lead in Manhattan Melodrama. This film is remembered for two reasons. First, it was the film that John Dillinger went to see right before he was murdered by the FBI outside a Chicago theater (Loy was displeased by the macabre publicity later associated with the film). Second, it was the first film she ever made with co-star William Powell. Powell and Loy would become one of the most famous Those Two Actors pairs of all time, starring together in fourteen films in the 1930s and 1940s.

Another Powell-and-Loy film released that same year became the movie that both of them are best remembered for. The Thin Man, with Powell and Loy as a wisecracking married couple who have to solve a murder, was thought by the studio to be a low-budget B-Movie. It became a colossal hit, getting a nomination for Best Picture, and establishing both Powell and Loy as stars of the first magnitude. Five more sequels in the Thin Man franchise would follow, to diminishing returns in later installments.

The Great Ziegfeld, in which Loy starred as Billie Burke opposite Powell as Florenz Ziegfeld, won the Academy Award for Best Picture of 1936. More hit films followed until Loy mostly left acting behind to work in support of the American war effort in World War II. The Best Years of Our Lives (1946), one of the first films Loy made after the war, became the second film she appeared in to win Best Picture. She managed to find sporadic work as she aged, mostly in television; her last film role was in 1980. Her well-regarded autobiography, Myrna Loy: Being and Becoming, was published in 1987.

In one of Hollywood's more egregious Award Snubs, Loy was never so much as nominated for a competitive Academy Award during her career — not even for The Best Years of Our Lives, which got nominations for almost everyone else involved — but she did receive an honorary Oscar two years before her death in 1993.

Tropes that apply to her career: