Film / Race for the Yankee Zephyr 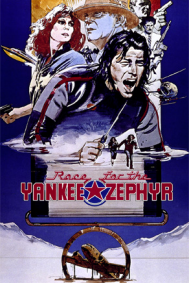 Barney (Ken Wahl) and his alcoholic partner Gilbert (Donald Pleasence) are helicopter pilots in New Zealand, netting deer from their decrepit Mixmaster. After Gilbert is accidentally hoisted up instead of a deer and dumped into a lake, he stumbles across the wreckage of the Yankee Zephyr, a crashed DC-3 from the Second World War.

Gilbert retrieves some of its cargo of medals (along with a crate of whiskey) and is impressed when an antiques dealer pays him $75 each for them. Convinced he's onto a good thing, Gilbert talks his daughter Sally into financing the necessary repairs to their helicopter so he and Barney can salvage the rest of the medals. But things get complicated when a gang of well-dressed, well-armed and well-equipped hoods, led by the urbane Mr. Brown (George Peppard) arrive on the scene, sparking a dramatic race via air, land and water for the real prize of Yankee Zephyr — the payroll of the US South Pacific fleet, $50 million in gold bullion.