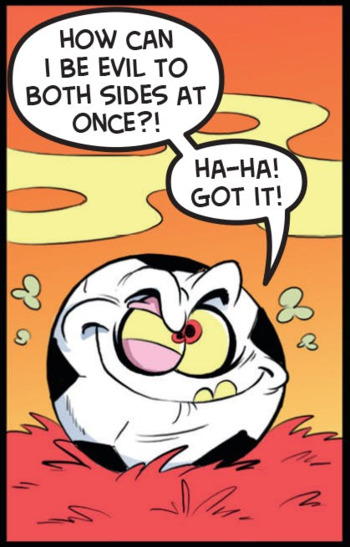 Visual Pun aside, possessing a ball to do crimes isn't a well-rounded idea.
Superman: It turns out Luthor had this chunk of Kryptonite that would have totally ruined me if he would've just whipped it out.
Batman: Really?
Superman: Yeah, but for some reason he told me his evil plan first and then tried to trick me into finding the Kryptonite myself. What's up with that?
Batman: Villains are stupid.
— How Superman Should Have Ended
Advertisement:

"Evil sows the seeds of its own destruction", saith the fortune cookie. Regardless of how savvy they might otherwise be, villains tend to inherently draw heroic attention to themselves that leads to their demise, or at least the demise of their Evil Plan. Even if their success is seemingly assured, they can't seem to help but do something evil that serves no purpose other than giving The Hero the extra motivation and opportunity to wreck everything, and he will.

Basically, they're saddled with carrying their own version of the Idiot Ball: the Villain Ball.

Sure signs that the Villain Ball is in play:

It seems they just can't help themselves, they are compelled to stop in their tracks to threaten innocent puppies just to prove that they are a Card-Carrying Villain. Inevitably, it's their own inherent Fatal Flaws that lead to their downfall, sometimes by Humiliation Conga. This may even lead to an apropos Karmic Death or Cool and Unusual Punishment.

When a previously composed and unflappable villain picks up the Villain Ball and runs with it as soon as his plans start going awry (which, naturally, only hastens his downfall), it's a Villainous Breakdown. When a villain's career is one long string of grabbing Villain Balls and facing all too predictable consequences, you're probably looking at Stupid Evil.

Shane thinks its a good idea that make an unstable conduit unconcerned with killing work for him by holding her only loved one hostage after she willingly did his dirty work.

Shane thinks its a good idea that make an unstable conduit unconcerned with killing work for him by holding her only loved one hostage after she willingly did his dirty work.