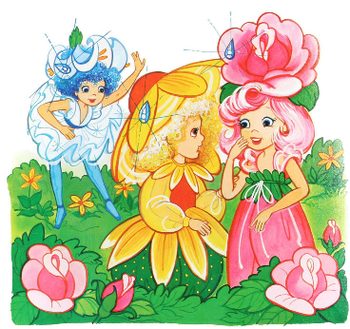 Rose Petal (right) and her friends
Long ago at Rose Petal Place, a teardrop brought flowers to life!
Advertisement:

Rose Petal Place was a short-lived franchise created by David Kirschner, with toys by Kenner in 1984. In conjunction with the toys, two TV specials were made to introduce the characters and setting, as were a series of books, cassette tapes, games, and even a vinyl record. The specials were produced by Ruby-Spears, with Marie Osmond voicing Rose Petal.

Long ago, the resident family of a Victorian-style house moved away, and a little girl took one last stroll through its garden, weeping, before they left. Her tears changed some of the flowers into little maidens, and their living arrangements were similarly transformed toys and gardening implements. In the present, Rose Petal's magical singing helps the garden and flowers live forever, but trouble lurks in the form of the hideous spider-woman Nastina, who is always trying to take over the garden with the help of her horsefly assistant Horace.

, dealt with Rose Petal and her friends thwarting Nastina's attempts to take over the garden, leading Nastina to lure Rose Petal into a trap by pretending to have reformed. The second special, Real Friends

, dealt with Rose Petal's friend Sweet Violet attempting to get into showbiz, only for Nastina to exploit her worries and turn everyone against Rose Petal so she could attack when their guards were down.