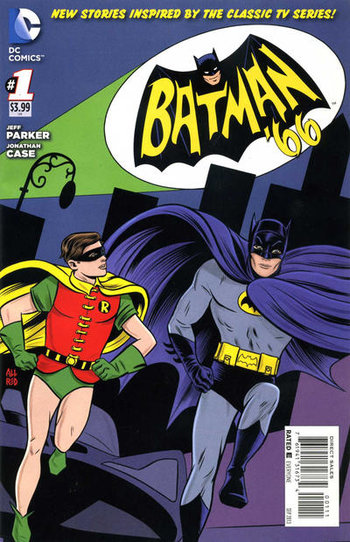 Batman '66 is a digital and hard-copy DC comic book series published from 2013 to 2016, featuring new stories set in the continuity of the Batman (1966) live-action TV series from 1966, famously starring Adam West and Burt Ward. Initially most stories were written by Jeff Parker, but later a wider variety of writers contributed. The series started out with careful copies of the TV versions of the characters, but later began to introduce versions of Batman characters introduced after the Silver Age, with changes to the design and concept to fit with the TV show's era and light tone.

Following the cancellation of the main series, it was brought back for a number of mini-series and one-shots featuring crossovers with other works of the era. Alongside its first run came a counterpart in Wonder Woman '77, a similar digital-first title featuring new stories set in the continuity of the 1970s Wonder Woman TV series, now shown to take place a decade after Batman's adventures.

In 2021, DC announced a Spiritual Successor, Batman '89, further exploring the world of Batman (1989) and Batman Returns.