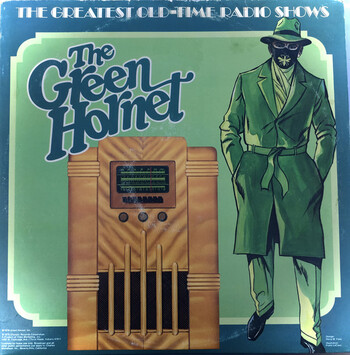 American Proto-Superhero franchise in several forms of media. Originally a radio show, adapted into two movie serials, a number of comic books, a 1960s TV adaptation (probably the most famous version of the property, responsible for launching the Western acting career of martial arts legend Bruce Lee), and a 2011 movie adaptation.

Furthermore, a new film remake for the property was announced to be in development in April 2020 with the current title of Green Hornet and Kato.

This page concentrates on the radio series and the franchise in general.

The Green Hornet radio series was created by George W. Trendle and Fran Striker of Detroit radio station WXYZ, and premiered on January 31, 1936. It was a very long running series, ending on December 5, 1952, having run nationwide on the Mutual Broadcasting System, the NBC Blue Network, and its successors "The Blue Network" and the American Broadcasting Company (ABC).

Trendle and Striker, who had earlier created the character of The Lone Ranger for a western themed radio series on WXYZ, connected the two shows by making the protagonist of The Green Hornet, newspaper publisher Britt Reid, the grand nephew of John Reid, the lone survivor of an outlaw ambush of a squad of Texas Rangers, who became The Lone Ranger. While hinted at in earlier episodes, the blood relationship between the Hornet and the Ranger was explicitly stated in the Green Hornet episode "Too Hot to Handle" (first airdate, November 11, 1947), but never significantly used after that. Trendle's sale of the rights to the Lone Ranger property to Jack Wrather in 1954 made it impossible for later adaptations of The Green Hornet to make explicit reference to the relationship (although the 1990s NOW Comics comic book adaptation featured a veiled reference to the relationship, in the form of a painting, apparently of the Lone Ranger, which appeared in Britt Reid's living room); more recently, Dynamite Comics created a crossover comics series involving both characters.

The radio series introduced the most prominent characters, equipment, and plot devices featured in later adaptations:

Characters specific to the radio series and rarely used in other adaptations include:

The radio series was popular enough to spawn two film serials, The Green Hornet (1940) and The Green Hornet Strikes Again (1941). The serials are noteworthy in that Kato's nationality was changed once again (this time to Korean), and Kato was played by Keye Luke ("Number 1 Son" in the Charlie Chan film series, and much later, "Master Po" in the Kung Fu TV series). The serials have had two home video releases; on VHS in the 1990s and recently on DVD.