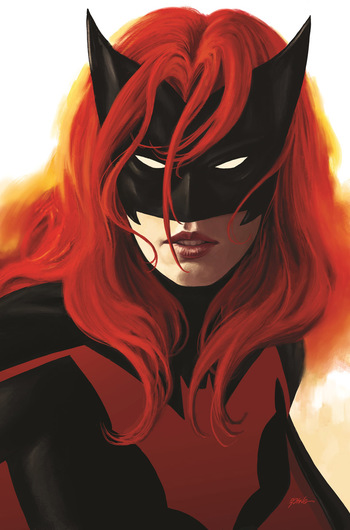 The original Batwoman, Katherine "Kathy" Kane, was a character introduced to the DCU in 1956 to serve as a love interest for Bruce Wayne, who was being accused by some people of being gay. The character first appeared in Detective Comics #233 (July, 1956). She was created by writer Edmond Hamilton, and artist Sheldon Moldoff. She lasted for about a decade, but was dropped (along with the first Bat-Girl, her niece Betty Kane) in 1964 in an attempt to prune down the Bat-Family, which was overly crowded with characters. There was a half-hearted attempt to revive the character during the Bronze Age, but this came to an abrupt end when Kathy Kane was Killed Off for Real by Ra's Al Ghul's League of Assassins in Detective Comics #485 (August, 1979). Post-Crisis continuity initially decided that there had never been a Kathy Kane Batwoman. However, the original Kathy Kane, Batwoman tenure intact, was eventually featured in Grant Morrison's Batman.

As with Batman himself, her portrayal has varied over the years, reaching varying points on the Sliding Scale of Idealism Versus Cynicism depending on the time of her writing (the campy Silver Age vs. the darker Modern Age) and the medium of the story (The DC Animated Universe film, though pushing the boundaries of what was acceptable, remained restricted in what it could show).

An In Name Only version of Batwoman was the focus of the Batman: Mystery of the Batwoman movie. Ruby Rose portrayed the Kate Kane incarnation of the character in the Arrowverse, beginning in the Elseworlds crossover before going on to star in the self-titled Batwoman (2019) series. Rose departed the show after its first season, with new character Ryan Wilder, played by Javicia Leslie, taking over the Batwoman identity in the show's second season. Wallis Day was then recast as Kate for several episodes before officially handing the show off to the Ryan Wilder character at end of season two. The character of Ryan Wilder was also introduced into the comics, making a cameo debut in issue #50 of Batgirl’s fifth volume, though with no indication she will become Batwoman there as well. 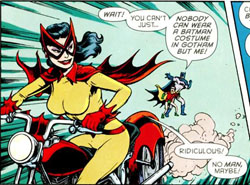