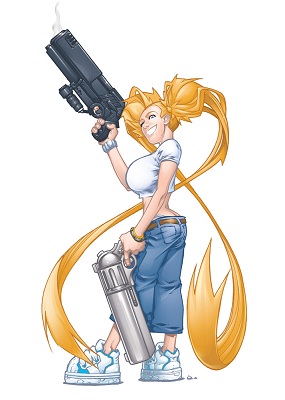 Julie Glocke is an ordinary teenager who, on her way to school one day, is almost hit by a motorcycle. The driver, Eddie Daytona, is a super thief who just stole a nano-robotic, intelligent weapon from White Sleep Technologies and is on the run from their robots. Before leaving Julie, he stealthily slips the weapon in Julie's backpack. The weapon later activates and injects itself into Julie, fusing with her body and mind. As a result, anytime she's under high stress, the weapon activates turning her into a large breasted, extremely long haired, gun-toting adult version of herself with an array of superpowers.

While the powers are great, being thrust into the superhero life is not what Julie had in mind, and things are only gonna get more complicated as there are many factions that retrieve the weapon, and extracting the weapon out of Julie will kill her.

Bazooka Jules first debuted in 2000 as a ten page short story in Com.x issue zero, an anthology comic book launch by Com.x that introduce readers to their line. A six issue miniseries was planned and began the following year but unfortunately the series only made it to issue #3.