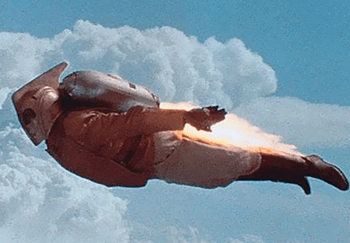 Asbestos-lined pants and boots are optional upgrades.
A standard piece of equipment for anyone from The Future. A backpack that lets the wearer fly by shooting jets of fire (or concentric rings of Pure Energy) out of the back, parallel to the wearer's legs. Strangely enough, nobody ever suffers Toasted Buns as a result. Nor do most ever run out of fuel, or even consume any fuel of any sort in the first place.
Advertisement: