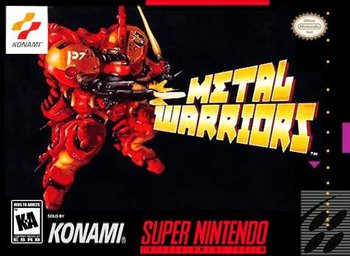 Metal Warriors is a game developed by LucasArts and published by Konami in 1995 for the Super Nintendo.

The game is LucasArts's take on Assault Suits Valken, another 2D mech action game (also published by Konami), but with a slower and less arcade-y gameplay. The game has more emphasis on piloting multiple types of mech suits either for combat or exploration, this is done thanks to the ability to exit your suit mid-gameplay.

The story takes place in the year of 2102 with the United Earth Government fighting a losing war against the Dark Axis. With the Earth forces exhausted and the Dark Axis taking over Earth, a group of elite pilots have become Earth's last hope and they are known as... The Metal Warriors.