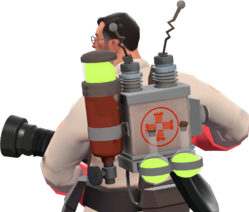 The backpack The Medic wears is called the Emerald Jarate.note If you catch the Sniper's drift.
"Why worry? Each one of us is wearing an unlicensed nuclear accelerator on his back..."
— Peter Venkman, Ghostbusters
Advertisement:

An ordinary backpack doesn't do anything too special, being that it's just there to carry things around, and, by its nature, weighs you down and gets in the way in the process. An Awesome Backpack is different though, such that you end up wishing you could get your hands on one. While most Awesome Backpacks aren't for carrying things around, it can still involve a normal backpack if it constantly provides items that are a central part of a character's capabilities (especially for Crazy-Prepared characters).