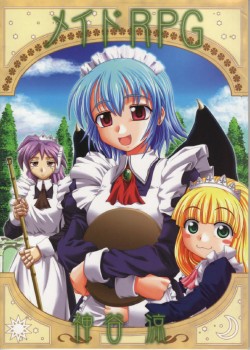 From left: EB II, Hizumi, and Yugami.
"When it comes down to it, Maid RPG is a goddamn weird game."
— Ewen Cluney, the translator.
Advertisement:

Maid RPG is a Tabletop Game created by Ryo Kamiya in 2004, and brought into English in 2008 by Ewen Cluney and Diamond Sutra. It revolves around the Anime concept of maids, and all its related tropes. The setting could be anywhere, from fantasy to present-day to cyberpunk to space, as long as there are the Maids (players), the Master (the GMPC), and the Mansion (where the adventures take place).

Players choose their character name and age, and roll for everything else. Apart from their Attributes, however, they may reroll anything they want (with the GM's permission), or simply pick and choose from the tables directly. However, the most fun is had when you are forced to randomly generate everything, as the results are often the funniest part of the game.

The original core rulebook is less than 40 pages, but two expansions containing optional rules, Koi Suru Maid (Maids in Love) and Yume Miru Maid (Dreaming Maids) were released in 2005. The English version puts them all together into a book over two hundred pages long. The rules are presented with example skits featuring Demon Maid Hizumi, Perverted Maid Yugami, and Ryo Kamiya himself. Later optional rules include commentary from Mistress Nejiri, EB II, and Y.

Has the distinction of being the first Japanese tabletop RPG ever to be officially brought to the West.

Though there is little to no inhibition to playing as The Loonie like few other TTRPGS, it still allows itself to retain dark, dramatic, romantic, or horror-esque capabilities.

This game is also notable in that nearly any anime trope you can think of (especially character-related ones) are built into the rules somehow.

There are a few games of Maid RPG going on in the TV Tropes forum - by Tropers, for Tropers! Look for Maid games in the "Role Playing Signups"