I Want My Jet Pack 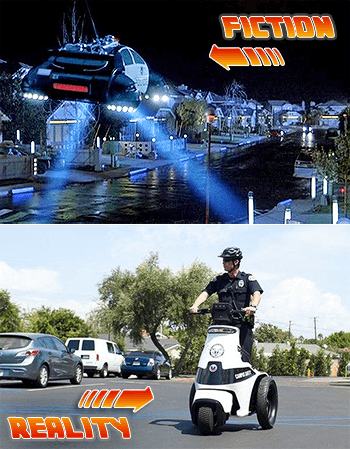 We write the year 2015 ...
Cueball: It's 2011. I want my flying car.
Megan: Dude. You're complaining to me on a phone, on which you buy and read books, and which you were using to play a 3D shooter until I interrupted you with what would be a video call if I were wearing a shirt.
Cueball: Can't I have a flying car, too?
Megan: You'd crash it while texting and playing Angry Birds.
— xkcd, "Flying Cars"

Speculative Fiction always seems to think that the future is going to be a lot more flashy and interesting than it actually turns out to be. The Year 2000 was supposed to give us lunar and undersea colonies, holographic radios, holographic movies, autodrying jackets, autolacing shoes, accurate-to-the-second weather reports, weather-control machines, hoverboards, lifelike androids, virtual reality, flying cars, food pills, robot buddies, laser weapons and most importantly, Jet Packs!

We got a lot of cool stuff since the turn of the millenium: note The Burj Khalifa skyscraper, 360-degree videos, full 3D street maps, tiny supercomputers (tablets and smartphones), Ultra HDTV, on-demand video streaming, GPS-equipped cars that look like stylized versions of their 1970 counterparts, increasingly capable partially-self-driving cars, average packaged food, multi-purpose handheld devices, unintelligent industrial robots, Roombas, reusable orbital rockets, relatively inexpensive DNA tests, real-time language translation, 3D printers, and several varieties of firearm made with plastic. Some of the more daring concepts posed by fiction would be impractical in real life, or way too costly to research and develop, not to mention patent and regulate. Nobody thought about the Internet (although some came pretty close), though, nor extremely efficient fast food (on the other hand, Harry Harrison has The Stainless Steel Rat take residence in the back of, and later rob, a fully automated fast food place that produces fully cooked burgers in one minute, so maybe they did). but not most of the cool stuff we were promised.

The trope is sometimes spoofed by characters brought from the past into the future, only to be disappointed by the lack of "sci-fi" things present. "This is the future? Where are the food cubes? Where are all the phaser guns?" "My Flying Car?!"

A side-effect of Sci-Fi Writers Have No Sense of Scale. It's very easy to imagine fantastic tools that solve a dozen of today's problems at once, or combine features of two or more unrelated present-day artifacts. It's harder to do the math on how much they would cost to build, the power input they would need to be used regularly, or the cost and potential side problems when released to the general market.

This trope is also largely a result of changing technological trends. Much of our classic sci-fi technology is ultimately rooted in the Jet Age, with its Cold War-driven focus on spacecraft and industrial gadgetry. Instead, technology turned more towards miniaturised computers and consumer electronics, and so much of today's speculative fiction now envisions a future full of nano-computers, neural networks, implausible user-interfaces, and so forth, while cars remain firmly on solid ground; but it may very well be that these visions of the future will turn out just as accurate as the old ones. After all, Moore's Law being on its deathbed

while nanotechnology and artificial intelligences still being far from as powerful as sci-fi authors promised they'd be certainly isn't helping their case.

This trope is named for the punch-line to Leo's rant in an episode of The West Wing on how we did not get the future we were promised.

This trope is pretty much summed up in the Tom Smith Filk Song "I Want My Flying Car."

Actually inherent to Space Operas; though all Real Life space development is based on unmanned probes, all FTL Starships must have people on them because it's hard to tell entertaining stories about unmanned probes.

As a matter of fact, jetpacks

have been a reality since the 1960s, and can even be bought today. The bad news is, they're pretty unimpressive.

In more recent works, it seems to be fashionable to set the story really far in the future (as in, centuries or more), so no one will still be alive to see how inaccurate it is.

Contrast with: It's a Small Net After All, (in the aforementioned rant, Leo dismisses the Internet as "A more efficient delivery system for pornography") Tech Marches On. Compare with Zeerust and Failed Future Forecast.

See also Failed Future Forecast and Science Marches On. If Nazis get them, and you don't, it's Stupid Jetpack Hitler and that means you're fucked.