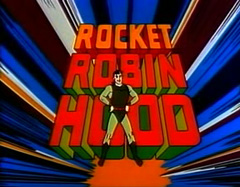 60's Canadian cartoon series set in "the fantastic years to come," supposedly the year 3000, starring Rocket Robin Hood and his Merry Men, direct descendants of the English originals. Produced by Toronto-based Trillium Productions, the second and third seasons were done by Ralph Bakshi, and had a much different feel from the first. Though largely forgotten outside of Canada (and Mexico), the series has been a standby in children's programming blocks ever since its original release, due in part to Canadian content mandates.
Advertisement:

Many animation sequences from this show were re-used in episodes of the 1967 Spider-Man series and at least two episodes, "Dementia Five" and "From Menace to Menace" were recycled with Spider-Man replacing Robin.