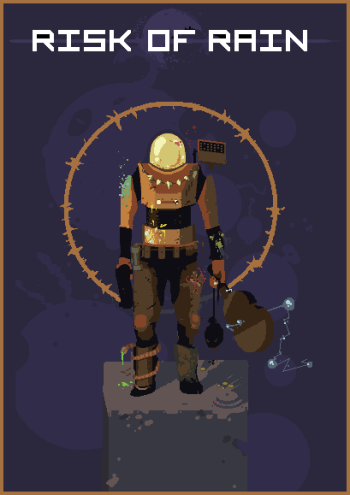 Every bend introduces pain and horrors of the planet. You will die.
Risk of Rain is a Sci-Fi Action Roguelike for PC which was released on Steam on November 8, 2013.
Advertisement:

The game plays as a 2D roguelike platformer in which you play as one of twelve different character classes, each with varying strengths and weaknesses. You must defeat alien creatures to level up and gain gold, whilst the difficulty steadily increases as time goes on. The main goal of the game is to find the teleporter and use it to summon the level's boss; after slaying the boss (and an accompanying horde of enemies) you may advance to the next level. Your ultimate goal is to make your way back to the UES Contact Light so you can take off and escape the planet.

One of the game's unique selling points is that the whole thing is a very loose Timed Mission via Dynamic Difficulty. Difficulty ramps up as time elapses as well as when you advance levels, and if you take too long you will be swarmed with powerful enemies and even multiple bosses per level. Since item drops scale up on a per-level basis, this means that players that are too slow will get slowly outscaled by the horde of enemies descending upon them. The focus of the game is thus to continue moving at a brisk pace throughout the levels, collecting items as you go, in order to prevent yourself from getting swarmed to death.

Risk of Rain contains examples of: