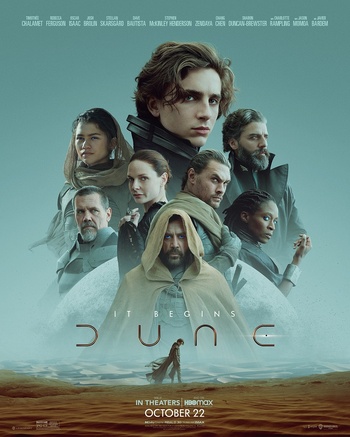 Beyond fear, destiny awaits.
"An animal caught in a trap would gnaw off its own leg to escape. What will you do?"
— Gaius Helen Mohiam
Advertisement:

Dune, or Dune: Part One, is an epic Space Opera film and a feature adaptation of Frank Herbert's seminal 1965 novel Dune, produced by Warner Bros. and Legendary Pictures. It is directed by Denis Villeneuve and co-written by Villeneuve, Jon Spaihts and Eric Roth, and covers roughly the first two-thirds of the novel.note To be specific, the movie wraps up shortly before the end of Book II of the novel, though there's stuff left in that book to cover in the sequel.

The story takes place in the far future of humanity, in the Galactic Padishah Empire. By Imperial decree, Duke Leto of House Atreides is given stewardship of the dangerous desert planet Arrakis, also known as Dune, the only source of the most valuable substance in the universe, the Spice melange, a drug that extends human life, provides superhuman levels of thought and makes foldspace travel possible.

Although Leto knows the opportunity is an intricate trap set by his enemies, House Harkonnen (who were in charge of harvesting the Spice on Arrakis before and had to withdraw), he takes his Bene Gesserit concubine Lady Jessica, young son and heir Paul, and most of his trusted advisers to Arrakis. Leto takes control of the Spice mining operation, which is made perilous by the presence of gigantic sandworms. A bitter betrayal in the form of a surprise attack by the Harkonnens and Imperial Sardaukar overwhelms House Atreides, and Paul and Jessica flee in the desert in search of the Fremen, the natives of Arrakis. While on the run, Paul has visions of a possible destiny for himself, and a bloody one at that, which might change the galaxy forever...

The film was originally scheduled for release on December 18, 2020, but was pushed back to October 22, 2021 due to scheduling issues caused by the COVID-19 Pandemic. It was simultaneously released in theaters and on HBO Max in the United States. The film had its world premiere on September 3, 2021 at the Venice Film Festival and was released in most countries ahead of the US release.

A sequel, Dune: Part Two, was confirmed by Legendary Pictures to be in development for a planned November 17, 2023 release

shortly after the release of Part One, and will cover the remainder of the book, with the addition of Austin Butler (Elvis) as Feyd-Rautha, Florence Pugh as Princess Irulan, and Christopher Walken as Emperor Shaddam IV to the cast. Villeneuve is hopeful to do a third film based on Dune Messiah, and he has also been announced to direct the pilot for Dune: The Sisterhood, a live action Spin-Off series set in his film's universe and focusing on the Bene Gesserit, for HBO Max. Diane Ademu-John is set to serve as showrunner.

For the other live-action adaptations of Dune, see Dune (1984) and Frank Herbert's Dune.

Paul Atreides and Gurney Halleck demonstrate the Duneverse's "Holtzman shields" in a sparring match. The shields repel fast-moving objects, permit only slow moving ones to pass, and (in the book) cause explosions on the level of a tactical nuke when struck with a laser, which forced ground warfare to revert mostly to melee combat.

Paul Atreides and Gurney Halleck demonstrate the Duneverse's "Holtzman shields" in a sparring match. The shields repel fast-moving objects, permit only slow moving ones to pass, and (in the book) cause explosions on the level of a tactical nuke when struck with a laser, which forced ground warfare to revert mostly to melee combat.