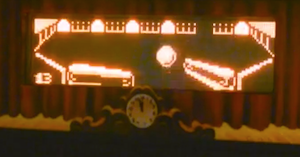 Yo, dawg! I heard you like pinball, so I put a pinball game in your pinball game so you can pinball while you pinball!
"Video Mode - activated."
—The Terminator, Terminator 2: Judgment Day
Advertisement:

In Pinball games, a Video Mode is a Mini-Game that temporarily stops the playfield action and switches to a video screen. There, things continue with a simple Video Game that can be played with the left and right flipper buttons. After the Video Mode is over, the pinball is returned to the playfield to resume the game. The ease or difficulty of reaching the Video Mode will depend on the specific pinball machine.

The Trope Maker is Williams' Terminator 2: Judgment Day pinball machine, although technically it was not the first pinball game to include a video game; that would be Caveman by Gottlieb.