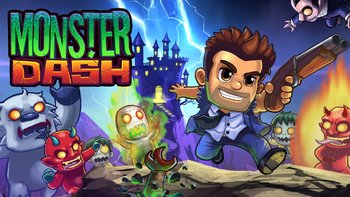 Monster Dash is a 2010 iOS game created by Halfbrick Studios. The player joins Barry Steakfries as they must complete goals and travel as far as they can as they blast through monsters.
Advertisement:

Game has recieved a huge update in 2014, which added missions, new soundtrack and leveling system, with old version being available as Arcade mode, and another one in 2020, which completely overhauled the graphics and introduced some dialogue for Barry, as well as costumes.