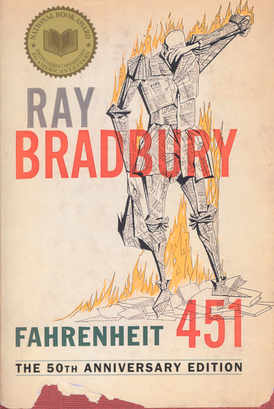 In the near future, society has become a complacent lot. Gone are the days when people would enjoy nature, think independently, let alone read books — in fact, thanks to The Government's policy of Bread and Circuses, books have been outlawed as dangerous sources of dissent and unhappiness. Now, it's all just state-sanctioned mindless entertainment: three-dimensional interactive television, reckless driving, "fun parks" (where people commit petty crimes with wild abandon), and the scarce reading matter deemed vapid and shallow enough to be harmless (e.g. trade brochures, pornographic magazines, and caption-less comic books).note Though the 1966 movie adaptation has only caption-less newspaper comics as acceptable, while everything else is banned.

It was made into a film starring Oskar Werner and Julie Christie by François Truffaut in 1966 (which had a lot of Troubled Production issues and is both the first and last time Francois Truffaut ever did an English language movie), and was also adapted into a video game for Apple ][, Atari ST, Commodore 64, IBM Personal Computer, Apple Macintosh, MSX, and Tandy 1000 in 1984; it was also adapted into a stage play also written by Bradbury in the 1990s. A new adaptation by Ramin Bahrani and HBO Films was released,

Compare Aldous Huxley's Brave New World (which is also about a hedonistic future where past morals and beliefs are considered Values Dissonance and a society that does whatever it can to make its people happy at the cost of personal freedom and individuality, only Brave New World has a Downer Ending and is more of a Fish out of Water story) and Mike Judge's Idiocracy (which is more satirical and has a more-or-less happy ending to it). Contrast with 1984.