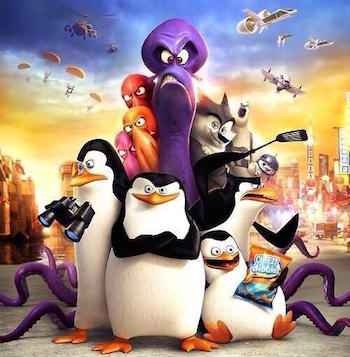 A 2014 feature film from DreamWorks Animation, starring the eponymous penguins of the Madagascar film trilogy and TV series spinoff.

In the film, which begins right after Madagascar 3: Europe's Most Wanted, the four penguins (Skipper, Kowalski, Rico, and Private) are breaking into Fort Knox for Private's birthday, only to cross paths with a vengeful octopus named Dave. The quartet escapes from Dave's forces and hook up with the North Wind, an animal task force out to stop Dave before he can utilize his mysterious Medusa Serum. Unfortunately, the two teams of heroes end up clashing with each other, allowing Dave to proceed with his evil penguin-threatening plans...

As the film is in canon with the films and not the TV series, tropes about the characters within should go here.

For the TV series, see The Penguins of Madagascar.

"Kowalski! What tropes can you find in this movie?"

Example of:
The Snack Is More Interesting