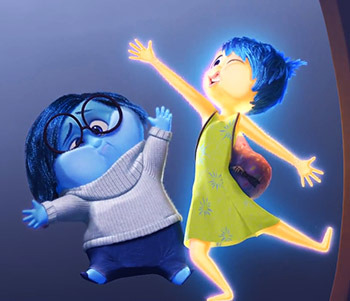 This Slapstick move is a specific aversion of Soft Glass. When a character unwittingly runs, swings (from a rope), flies or is thrown into a pane of glass, rather than go through it or bounce backward, he or she will just smack flat against it.

More often than not, the impact is seen from the other side of the window. This is usually followed by a short pause, sometimes with a close-up of the comically distorted face against the glass, before gravity reclaims the victim. Or, if dangling from a cable or the like, he or she is dragged away.

The unfortunate then starts sliding with a Stock Sound Effect of flesh slipping against glass. The fact this peculiar noise is generally considered grating by most people is part of the gag.

Mostly seen in animation, although live-action examples are not unknown. In the more cartoony shows, the character will probably be fully Squashed Flat against the glass, like a bug on a windshield.

Sometimes, especially if the character is super strong, super fast or very heavy, the Soft Glass aversion will be pointed out by the glass being reinforced, or an indestructible substitute. This adds to the humor by having the pratfall happens to someone unexpected.

Sometimes combined with Camera Abuse. Watch Out for That Tree! is a Super-Trope. Compare Running into the Window, where the humor is from the glass not being detected, and there's usually no "getting squashed and slide" part since the impact is less speedy (although both tropes can be combined), and Destination Defenestration, which is generally intentional on the part of another character throwing the other one, and is much more Rule of Cool as a thing, as the impacting character keeps going. Unless the glass resists the impact.

Do not confuse with Bar Slide, which is about sliding a glass along a bar.