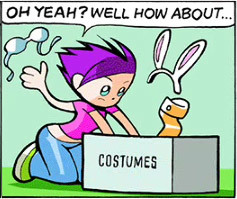 "Where is that pass? It must be somewhere. Freedom to the city of Skaro, no? Pilot's licence for the Mars-Venus rocket run. Galactic passport? Do you travel much? Honorary member of the Alpha-Centauri Table Tennis Club."
— The Doctor, Doctor Who, "Robot"

The standard comedy bit for any character with a magic hat, Bag of Holding, or other large collection of stuff in an impossibly small space is that he can never find the thing he needs when he needs it.

He'll reach in, rummage about a bit, and triumphantly pull out... an old boot. Or a pink beach umbrella. Or a rubber chicken. Or something else equally useless or even embarrassing.

If he perseveres, he may find the thing he's after on the third attempt. Or it may take much longer. Or time may run out before he finds it, leaving him to improvise with what he did find. May also be voiced over.

This can cross over with Extended Disarming, if the other items pulled out are increasingly-ridiculous weapons, or Pull a Rabbit out of My Hat. It can also be seen in more mundane contexts, such as when a character is trying to find something in a cupboard.

Compare Exploding Closet. If your backpack, purse, or bookbag is sufficiently unorganized, this may well be Truth in Television.

Also see Grail in the Garbage, which is what happens when someone doesn't rummage in the junk pile for an extended period of time, and instead ultimately decides to throw the whole mess out without checking to see if there's anything important in it.