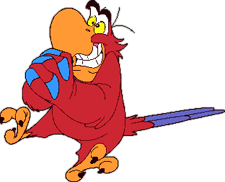 You shouldn't even have those!
Advertisement:

The tendency of illustrators to give humanlike teeth to birds and other animals that lack them in Real Life. NOTE: This trope can apply to all animals that don't normally have teeth, not just birds.

The trope namers are all the birds in traditional animation who often appear to lack teeth normally - but will suddenly have them in order to form a human-based facial expression that requires them. A big toothy grin, clenched teeth of rage, and so on. This trope can also cover teeth appearing on other non-toothed animals (eg turtles), but birds are overwhelmingly the most common animals to be subjected to it.

Sometimes, all the teeth in the animal's mouth (whether of a toothed species or of a toothless one) are drawn as incisors, whether a little wider than real incisors or not. In Real Life, no animal has a mouth with dentition made up entirely of incisors, not even humans.

This is almost exclusively seen in traditional animation. In CGI, on the other hand, the transient teeth would be harder to implement, since all animation of a character is done from a fixed model.

A somewhat rarer form of the trope is for the not-normally-toothed animal to have teeth at all times. This is somewhat more common in CGI, given the difference between traditional and computer animation.

Similar to No Mouth, where a mouth appears only when the character is speaking. See also Cartoony Eyes, Mouthy Bird, and Feather Fingers. For the record, actual toothed birds existed (once) and were once known as Odontolcae or Odontotormae

, depending on how their teeth are set, until it was realized that many of these birds were no more closely related to each other than to modern birds.

In "The Little Mermaid," when trying to figure out what's changed with Ariel, Scuttle flashes a grin with a full set of teeth that normally are not seen on him and only appear maybe once or twice elsewhere in the film, very briefly.

In "The Little Mermaid," when trying to figure out what's changed with Ariel, Scuttle flashes a grin with a full set of teeth that normally are not seen on him and only appear maybe once or twice elsewhere in the film, very briefly.