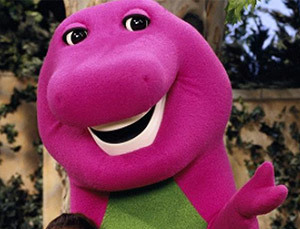 Barney gives us an inaccurate depiction of a Tyrannosaurus rex's dentition.
Travis: And while we're talking about mouth bones: why I gotta floss!? One solid piece.
Griffin: One big tooth!
Travis: One solid chomper!
— The McElroys giving notes to God, My Brother, My Brother and Me #494
Advertisement:

Most people have 32 teeth, and in animation it isn't always practical to draw each individual tooth in a character's mouth. In some case it can run the risk of careening down the Uncanny Valley. Because of this, a popular way of simplifying teeth is to draw them as a solid toothy mass stretching from one side of the mouth to the other.

Mostly an ignored trope. Especially unusual when some characters have tooth strips while others have realistically drawn teeth. It's common for people with normal teeth to be drawn this way while characters with Scary Teeth, Cute Little Fangs or otherwise unusual chompers have their individual teeth drawn to further emphasize their otherness. Depending on how loosely an animator is tethered to their model sheets, this can vary Depending on the Artist.

Contrast with British Teeth and More Teeth than the Osmond Family when you really do mean to see each one of those pearly whites. Tombstone Teeth are a lesser degree of simplification where the teeth are drawn individually, but just as rectangles. For a similar shorthand used on facial stubble, see Solid Cartoon Facial Stubble.