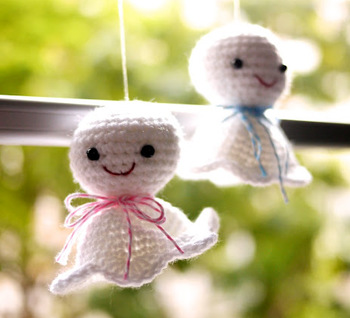 A small, ghost-like doll that is traditionally used by Japanese people to prevent rain. The name literally means "shiny shiny Buddhist monk" or alternatively "bright bright Buddhist monk" and it was originally designed to somewhat look like one - it very vaguely resembles a bald man. Children traditionally hung these in a window frame when they wanted the next day to have good weather.

They can also can be hung upside down if you want it to rain tomorrow. They date from the Edo period (1603-1868), when they first appeared in urban areas. They are still a fairly common sight in Japan today, especially in the homes of young children. Originally a simple chant of "Fine-weather priest, please let the weather be good tomorrow" has since evolved into a much longer and more elaborate Nursery Rhyme:

The Henohenomoheji face is sometimes used on teru teru bozu.