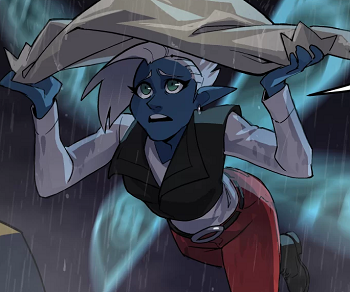 It's raining and you don't have an umbrella? What do you do? Grab the nearest items, fashion something out of them, and you have yourself an improvised umbrella.

Occasionally, a big leaf or a newspaper will be used for this purpose, and don't be surprised to see someone use a (empty) garbage bag as a raincoat, as all three are Truth in Television. A Wing Shield can be used this way.