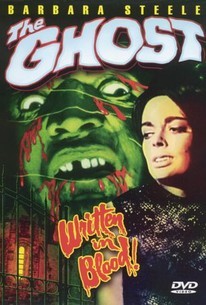 The Ghost (literally translated from the original Italian title Lo Spettro) is a 1963 Italian horror film directed by Riccardo Freda, who went by the pseudonym "Robert Hampton". It stars Barbara Steele as Margaret Hichcock and Peter Baldwin as Dr. Charles Livingstone. The film has the alternative titles The Spectre and Lo Spettro del Dr. Hichcock, which translates to "The Ghost Of Dr. Hichcock''.

Dr. John Hichcock (Elio Jotta, also known as Leonard G. Elliot) is a bitter disabled man. Margaret and her lover Dr. Charles decide to murder him. Afterwards, some bizarre things start happening, causing the two of them to wonder if they really did kill Dr. Hichcock, or if his ghost has come back to haunt them.