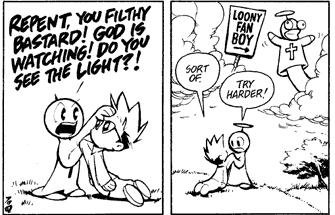 Even God thinks this guy is going overboard.
Advertisement:

You (and your little group of like-minded righteous people) are right and everyone else is wrong about the most important thing in the universe. But everyone else is just too stupid, or deluded, to see how right you are! So, if you are actually righteous and really want the best for/to save them you would be willing to do anything, right? Even if it might seem a little silly or counterproductive to those who don't understand the importance of what you're trying to do!

A character pulling Activist Fundamentalist Antics is likely to scream all the wrong slogans at all the wrong places: religious gatherings, comedy festivals, family holiday dinners, even funerals. They may well make botched attempts at Easy Evangelism or Epiphany Therapy, only to come across as a general Jerkass. They are likely to step on all sorts of metaphorical toes, including their own as they trip over their own feet. One hallmark of this mentality is the desire to somehow exile and/or exterminate certain types of people. Maybe said people break taboos and/or are 'immoral', but the real issue is what they 'are' and not what they do e.g. they are the SINFUL HELL-SPAWN/children of parents who ate egg-salad sandwiches on a Tuesday IN DIRECT DEFIANCE OF GOD'S WILL. This desire to exclude or eliminate said people stems from the fact that 'their kind' is fundamentally incompatible with the Activist Fundamentalist's vision of a righteous and Small, Secluded World. For the same reason, they're most likely Egocentrically Religious. Some psychologists have argued that the reason why some cultists behave this way — so militantly, and with so much hostility — is that they are desperately trying to convince themselves of the righteousness of their cause.

When The Fundamentalist (or any other fanatic) is played this way, they can still be scary. There might be a real risk that they'll go off the deep end and bring out the Torches and Pitchforks or resort to Honor-Related Abuse. Then again, it might also turn out that whatever windmill he was fighting was No Mere Windmill after all. Extra bonus points if two or more groups are doing this at the same time against each other; this might lead to spineless authorities giving in to both sides.

Silly, scary, or both, while the person doing Activist Fundamentalist Antics is often genuinely unsympathetic, it is not always so. They can have other redeeming qualities, or be on the right track but are taking it too far. They might also be wrestling with their life, conscience, and/or world-view. It can even lead to a Crisis of Faith if things don't turn out the way their indoctrination led them to expect.

Note that a character doesn't have to be an organized activist to be this trope, taking an activist attitude is enough.

Please note that this trope relies on how attitudes and behaviors are portrayed within the narrative of a work, and is thus incapable of having Real Life examples: While everyone agrees that there are a lot of silly Activist Fundamentalist Antics in Real Life, there will never be a consensus on which groups are this trope and which ones are not.

Compare Straw Loser, Lord Error-Prone and Black-and-White Insanity. Contrast Against My Religion, where the character personally refuses to do things that he considers to be against his religion, rather than trying to bully everyone else into behaving the same way. Also contrast The Soulsaver and Soulsaving Crusader, which can contain behavior that would be this trope if it weren't justified within the narrative. A particularly over-the-top Soapbox Sadie might act this way for every new cause that pops into her head. Proactive ones may take the direct sales approach and go Knocking on Heathens' Door.