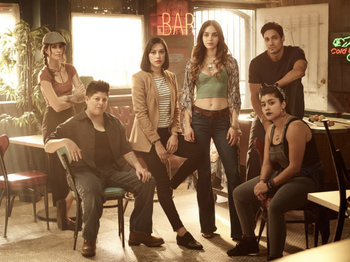 Vida is a Dramatic Half-Hour series created by Tanya Saracho for Starz. It premiered on May 6th, 2018.

The series follows two sisters, Emma (played by Mishel Prada) and Lyn Hernandez (played by Melissa Barrera), as they return to their hometown in East Los Angeles in a primarily Mexican-American community. The sisters must come together after a long absence in the wake of their mother's death, whereupon they learn that she was secretly married to another woman. From there, they must confront their own issues while Emma tries to sell her mother's bar, even though her widow, Eddy, won't allow it. A sideplot involves a local girl named Marisol who is fighting gentrification in their town.

On March 18th 2020, Saracho announced that the third season would also be the show's final season.

No relation to the video game of the same name.