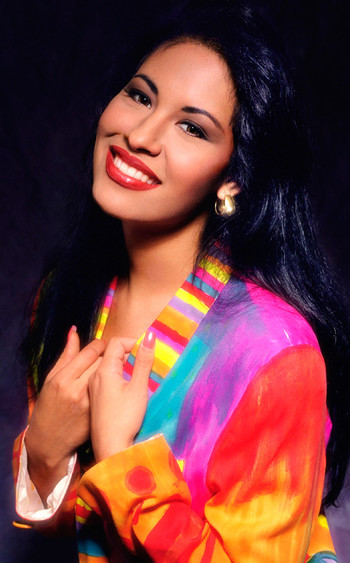 Como la flor / Con tanto amor / Me diste tú, se marchito / Me marcho hoy, yo sé perder
"The thing about Selena... like, say, Bob Marley, is that she actually put a genre on the map. Millions and millions of Americans would have never heard of Tejano music if it wasn't for Selena."
—Nathan Brackett, "Rolling Stone.''
Advertisement:

Selena Quintanilla-Pérez (April 16, 1971 - March 31, 1995), known to the world as Selena, was an American singer-songwriter from Corpus Christi, Texas.note Though she was actually born in Lake Jackson, a small-to-medium city now on the fringes of the Houston area. In fact, one of the physicians who delivered her was future politician Ron Paul. Selena's father, an ex-musician, recognized her talent as a vocalist early on, formed his family into a band, and made her the frontman — er, woman. The group, known as Selena y Los Dinos (Selena and the Guys), played Tejano / Tex-Mex music at small time gigs all over Texas while recording several independent albums. In 1989, Selena signed with EMI Latin and her individual career spun off from Los Dinos; her self-titled debut album appeared that year. Her second album, Ven Conmigo, was the first Tejano album by a woman ever to earn a Latin Gold certification. 1992 saw the release of Entre A Mi Mundo, and the single "Como La Flor", which became one of her signature songs. Her annual domination of the Tejano Music Awards, and the Grammy win for Selena Live!, cemented Selena's status as a Tejano legend. Four songs off of 1994's Amor Prohibido — the title track, "Bidi Bidi Bom Bom", "No Me Queda Más", and "Techno Cumbia" — topped the Billboard Latin Charts within a single year, and brought Selena, and Tejano music, widespread popularity in Latin America. Her rising success caught the eye of big name producers, who felt she was ready for an English-language crossover album; in 1995, Selena began working on Dreaming of You.

Meanwhile, Selena did extensive community outreach, launched her own fashion line and fragrances, and opened up a pair of clothing boutiques, called "Selena, Etc." She entrusted most of the business operations to her assistant Yolanda Saldívar, who also ran Selena's fan club and slowly worked her way into the band's inner circle. In early 1995, Selena's father raised concerns that Saldívar was controlling access to Selena and embezzling money from the fan club. Selena's initial doubt turned to suspicion as Saldívar held onto important financial documents from the boutiques and refused to hand them over. On the morning of March 31, 1995, Selena met with Saldívar to recover the papers and break off their friendship; as Selena turned to leave, Saldívar pulled a gun and shot Selena in the back, killing her.

Selena's shocking death, and the wildly successful crossover album Dreaming of You, released the summer after she died, have made Selena more famous in death than in life outside the Spanish speaking world. But Selena has been credited with raising the profile of Tejano music, and many of her songs are now part of the Latin music canon. The success of her crossover album helped pave the way for the "Latin Invasion" in the late '90s — a group that included Jennifer Lopez, whose portrayal of Selena in the Selena 1997 biopic is considered her breakout role. To date, Selena has sold over 60 million records worldwide. Many Mexican-Americans still revere her as a folk hero.note Even in the U.S., response to her death

was massive. Pretty impressive for someone who never took singing lessons and, for most of her life, wasn't even fluent in Spanish.

A series detailing Selena's life premiered on Netflix in December 2020. She is portrayed by The Walking Dead alumna Christian Serratos. Maria Garcia's podcast Anything for Selena

illustrates how Garcia shaped her own identity out of the inspiration of Selena's life.