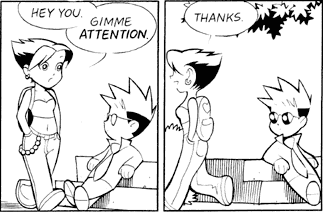 Whatever the cost, these characters have to be the center of attention. They don't even care about embarrassing themselves. That would just get them more attention... negative or positive, as long as all eyes are on them.

But isn't this page what they want? Maybe, but the only thing we can be certain of is that these people are only out for themselves. They don't really care about any side, and if you think they do, you are actually giving them what they want. May be deconstructed if their attention-seeking behavior is the result of Parental Neglect and they seek attention from other people to compensate.

Usually an attribute of the Alpha Bitch. A few Upper Class Twits do this. Often goes hand-in-hand with a Small Name, Big Ego. Children who are this are the Bratty Half-Pint. A Troll thrives as long as this trope is in effect.

A pathological form of this in Real Life is Histrionic Personality Disorder.

It's also a trait of Narcissistic Personality Disorder.

The key difference being how they react to personal criticism; a Histrionic will spin it in their favor, while a narcissist will become extremely offended. Acquired Situational Narcissism is a more benign form — where the situation the person is in is driving the behavior, and which usually ends when the situation does. Of course, not all Attention Whore behavior is pathological — some of it is intentional and used for PR or promotional purposes. The pathological forms are also generally more extreme and more personal — for example, an Attention Whore who is relatively harmless toward other people or themselves in their attempts to get attention or celebrity (e.g. a noticeably gaudy fashion style, giving everyone business cards possibly for some made up business) is probably not suffering from a personality disorder, but is simply a bit of a Shameless Self-Promoter.

See Fame Through Infamy for this trope at its darkest.

While this is clearly Truth in Television (and a Trope that's almost synonymous with "celebrity"), No Real Life Examples, Please! - As it's an Edit War waiting to happen.

Kadee just wants to get away from the cameras- while Finn milks them for all they're worth.

Kadee just wants to get away from the cameras- while Finn milks them for all they're worth.