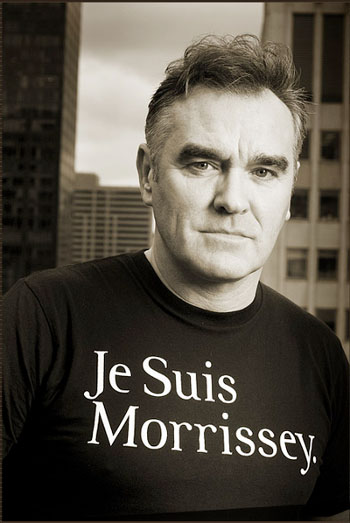 Bigmouth Strikes Again
"Irish blood, English heart,
This I'm made of,
There is no one on Earth I'm afraid of,
And no regime can buy or sell me."
— "Irish Blood, English Heart"
Advertisement:

Steven Patrick Morrissey (born May 22, 1959), better known as just Morrissey, is a British singer-songwriter who first became known during the '80s as the lead singer of The Smiths. He went solo shortly after the breakup of the group in 1987 and has been going strong ever since. He is known for his baritone voice and recurring lyrical focus on themes including isolation, sexual longing, dark and self-deprecating humor, and anti-establishment attitudes.

His controversial opinions about subjects ranging from immigration to vegetarianism, as well as his contrary and somewhat arrogant nature, mean that he is very much the type you either love or hate. Although misanthropic, he is charming and genuinely affectionate towards devotees and the few people who have gained his trust.

Another area of much speculation is Morrissey's sexuality. Many are of the opinion that his music has a lot of subtext, though Moz himself has said that he believes that sexual orientation doesn't matter. Indeed, his lyrics tend to be gender- (and thus orientation-) neutral. Despite — or perhaps due to — his desire for privacy, debate still rages on as to his sexual orientation. Is he gay? Bisexual? Asexual? The best answer is perhaps simply that he's Morrissey.

His fans tend to be very loyal, much to the annoyance of the music press and some non-fans. He's also fairly well known in the music world for frequently canceling tours and concert dates

at a moment's notice, for vague reasons.

. In a Spanish interview he said "They have scraped cancerous tissues four times already, but whatever, if I die, then I die. And if I don't, then I don't. Right now I feel good. I am aware that in some of my recent photos I look somewhat unhealthy, but that's what illness can do. I'm not going to worry about that, I'll rest when I'm dead."

His non-album singles and b-sides are collected on:

Morrissey has also written a few books. These are:

His work feature examples of: