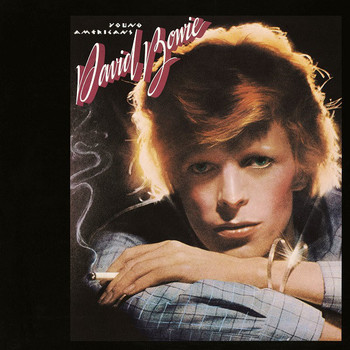 "Ain't there one damn song that can make me break down and cry?"
"Bowie. Soul. Period."
—Tagline from the 1991 Rykodisc reissue's advertising campaign (also used for the label's Station to Station reissue that same year).
Advertisement:

Young Americans is the ninth studio album by David Bowie, mostly recorded in Philadelphia in late 1974, with some tracks recorded in New York City in early 1975, and released in March 1975. A major departure in style from his previous albums, it is largely a soul album— or as Bowie liked to call it, "Plastic Soul"— with additional funk and Rhythm and Blues stylings.

The shift in sound had deep roots in Bowie's life and career. Bowie had long been an admirer of black music, having first gotten into the medium and industry after copiously listening to Little Richard as a child. Bowie had also worked closely with black artists previously in his career, including them in his backing band throughout the '70s. Additionally, Bowie experimented with Funk Rock with the track "1984" on his previous album, and shifted its associated tour to one based more around black music in its second leg, following the first leg's constant Troubled Production, a transition captured on the 1974 live album David Live (recorded during the end of the tour's first leg, in the early phases of the stylistic shift).

The album was a major commercial success for Bowie, peaking at No. 2 on the UK Albums chart and at No. 9 on the Billboard 200, later being certified gold in the UK, the US, and Canada.

The album spawned two singles: the Title Track and "Fame", both of which became both commercial hits and fan-favorites. "Fame" additionally served as Bowie's Breakthrough Hit in North America, having previously languished there as a cult artist due to the general unpopularity of Glam Rock west of the Atlantic. The single topped both the Billboard Hot 100 and the Canadian Singles Charts (his first single to do so), and went on to become the seventh best-selling single of 1975 in the United States.

Songs written by David Bowie except where otherwise noted.