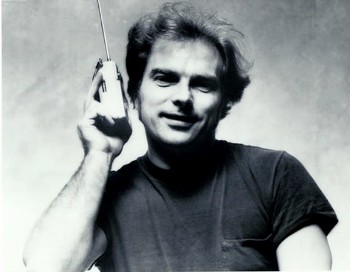 He's got you on his wavelength.
Advertisement:

Sir George Ivan Morrison, otherwise known as Van Morrison, is a singer-songwriter who was born in Belfast, Northern Ireland on August 31, 1945. Exposed to imported American music coming in through the docks, he was hooked on the blues and jazz from an early age. A window cleaner by day, at night he fronted a blues-rock band called Them, who were resident house-band at the Maritime Hotel in Belfast. The group had its big break in 1965 with "Here Comes The Night", which topped the British singles chart, and had limited success in the USA. A string of lesser hits followed, including a cover of Bob Dylan's "It's All Over Now, Baby Blue", a rock version of the blues standard "Baby, Please Don't Go", and a Morrison-penned number that was destined to be covered by some of the biggest names in the business and which is still popular today - the storming anthem "Gloria".

He left Them in 1967, heading to the USA to try to break into the business there. He was managed by the legendarily rapacious Bert Berns (who had previously worked with Them), recording one LP with him, Blowin' Your Mind. The contract Berns put him under was so unfair that it assigned Berns not only the song rights, but also performance rights. Morrison was paid a comparative pittance. The LP did not sell too well, so none of this might have mattered in the long run, except that a single called "Brown Eyed Girl" was released from it. A BBC documentary exploring song rights issued estimated that by 2012, this one song had earned $12-15,000,000. Morrison saw little of this cash.

Taken on by Warner (Bros.) Records, Morrison was allocated less than a week's studio recording time to come up with an LP. The result was the critically acclaimed Astral Weeks - an LP that he hated at the time, but has noticeably warmed to in later years. The album initially went unnoticed, but since then has become highly regarded by fans and critics. Today it is considered one of the greatest rock albums of all time (although it isn't exactly typical rock music).

The real breakthrough came with the next album, the big-band flavoured Moondance. Since its release in 1970, Morrison has released another thirty-two solo albums, including a collaboration with Irish trad band, the Chieftains. While having few single hits of his own, his songs have frequently been covered by others; Rod Stewart's version of "Have I Told You Lately..." topped the charts. His biggest single hit was "Whenever God Shines His Light", a Christmas duet with Christian rock star Cliff Richard.

It has been estimated that during his career, Morrison has dabbled with nearly every genre of music, with the possible exceptions of reggae, heavy rocknote Wavelength hovers on the brink of being a full-blown rock number, and rapnote Rave on, John Donne has a long spoken stream-of-consciousness section that hovers on the brink of being a Belfast rap. He has been married three times and has six children. His daughter Shana Morrison is a recording star in her own right.

The work of Van Morrison contains examples of the following: