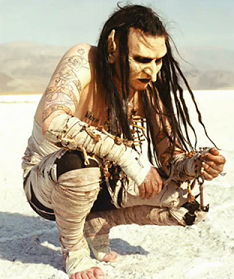 Mortiis, in his natural habitat.
Advertisement:

Mortiis is a solo project from Notodden, Norway fronted by Håvard Ellefsen (former member of the Black Metal band Emperor), who is also known as the namesake of the project. The name is a misspelling of the word 'mortis', which is the pronunciation used by the band. Mortiis started as a means to convey a story, and was highly conceptual. This aspect was lost over time and Mortiis slowly formed into a band. Between 1993 and 1999 the solo project focused on dark ambient music, which around two decades later was one of the main inspirations for the Dungeon Synth genre. He abruptly changed genres in 2001's electronic influenced The Smell of Rain, which featured more lyrics and style-wise ranged from Industrial to Synth-Pop. With the release of The Grudge Mortiis became an official band rather than a solo project, and the music shifted toward Industrial Metal. As of 2018, Mortiis once again became a solo project, and Ellefsen decided to return to his musical roots.

Until 2007, Mortiis was never seen without his mask; a troll-like face with a large nose and pointed ears. The mask changed over time as well; by the release of The Grudge it began to look like it had been stitched and stapled in place. Finally after 2007's Some Kind of Heroin, Mortiis removed the mask permanently; or so it seemed, as Ellefsen has been reappearing in the mask since 2016, perhaps due to fans requesting it.