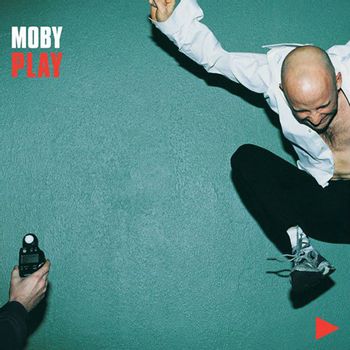 Play is the fifth studio album by Electronic Music artist Moby, released in 1999, and noteworthy for being not only his most popular album but the album that both saved his career but propelled him into superstardom.

Three years prior, he had released Animal Rights, an album that saw him stray almost completely from the rave-friendly techno style he had garnered success for to experiment with hardcore punk and alternative rock. (This was due to a number of reasons, namely his frustrations with the declining rave scene and the public's dismissal of his electronic music.) He was ridiculed and mocked the world over, and the album's disastrous reception led to Moby considering quitting music altogether.

Luckily, the next album he released just so happened to be Play.

An unexpected sleeper hit, it went from selling only six thousand copies in its first week to one hundred fifty thousand per week eleven months later. It has since sold 12 million copies, and it remains the best-selling album of electronically-produced dance music of all time.

A good portion of its success was its then-revolutionary promotion method: in response to getting next to zero radio play, every single song off of Play was licensed for use in advertising, films, and television. Not only did several dozen countries license songs, but many of them licensed multiple songs for use, making Moby's sound a global ubiquity, which in retrospect would come back to bite him later when his albums from the 2000s were not as well-received (and partly considered retreads of this album's formula). Regardless, Play was Moby's breakout album and is considered to be his best.

Play: The B Sides, a compilation of outtakes from Play released as B-sides across the album's various singles, was released just over a year after the album in October 2000. Moby described the outtakes as "a collection of songs that weren't quite appropriate for Play," and admitted that they would've never seen wide release if not for the album's success.

Play: The B Sides