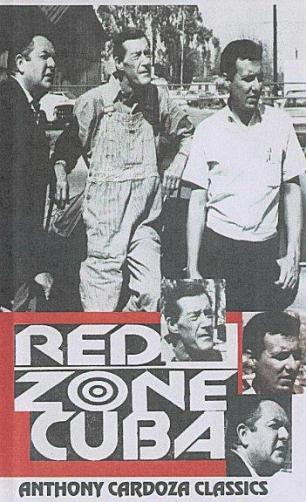 Red Zone Cuba, also known as Night Train to Mundo Fine, is a 1966 American drama film directed by Coleman Francis, who also wrote and co-produced the film, and played the starring role. The movie is about... well, it's hard to say really. The best summation we could say is that it follows the meandering adventures of an escaped convict, Griffin, and two ex-convicts he recruits along the way as they become involved in the 1961 Bay of Pigs Invasion, and a quest to find a hidden treasure in a tungsten mine.

Red Zone Cuba was Coleman Francis's final film as director, and his only starring role; in the other two films he helmed, The Skydivers and The Beast of Yucca Flats, he limited his acting to cameos. John Carradine receives fourth billing in the credits, and was prominently featured in advertising and promotional material for the film, but he only appears briefly, during a framing sequence at the beginning of the film. Carradine also sings the film's opening theme song, "Night Train to Mundo Fine" (pronounced "Finé"), performed by Ray Gregory and the Melmen.