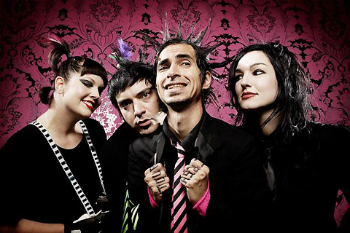 From left to right: Kitty, Steve, Righ?, Jimmy Urine and Lyn-Z
Influences:
I am not into that whole, "Well, you don't like my music so I am going to get you!" Who cares? I don't like my music! It's all about being an asshole and not all the testosterone you can handle. Look at me, I am just a skinny little nothing, somebody's grandmother could kill me!
—Jimmy Urine, lead singer
Advertisement:

Formed in 1997, Mindless Self Indulgence (usually shortened to MSI) was at first described by themselves as 'Industrial Jungle Pussy Punk', but have since denounced the term. It really is hard to describe their music, on the grounds that they never seem to adhere to a single set genre. Their early music is industrial punk with hip-hop elements, while their modern stuff goes more in the direction of electronica-laden dance music. Attitude-wise, they're a punk band, in the truest sense of the word.

I CAN'T WAIT FOR YOU TO TROPE ME UP AND MAKE ME HIP LIKE BADASS: