Music / Holy Wood (In the Shadow of the Valley of Death) 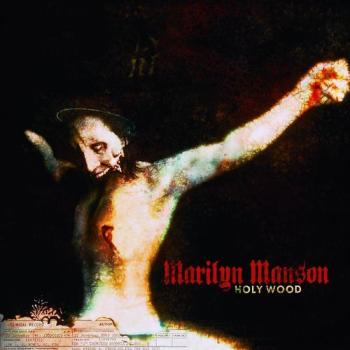 He's not a slave for a god that doesn't exist.

Holy Wood (In the Shadow of the Valley of Death) is a 2000 album by Marilyn Manson, the last in a trilogy/"triptych" with albums Antichrist Superstar (1996) and Mechanical Animals (1998) as their predecessors. Since the triptych's story is told in reverse order, Holy Wood therefore begins the narrative. "Disposable Teens", "The Fight Song" and "The Nobodies" were hit singles.

Much like the others, this album is a Rock Opera/Concept Album. Holy Wood's concept follows a protagonist named Adam Kadmon (derived from the Kabbalah which means "original man") who travels from Death Valley (a land populated by social outcasts) to Holy Wood (a city-sized amusement park with main attractions of death and violence). He tries staging a revolution but is consumed by Holy Wood's perpetually violent culture, its "guns, God, government" ideology, and its religion of "celebritarianism" where dead celebrities are worshipped and John F. Kennedy is revered like a modern Jesus.

The album came out when Manson was under fire for supposedly inspiring the 1999 high school shootings in Columbine, because the teens who committed the murders were fans of him. It later turned out that this rumor was false, but this didn't diminish the public outcry about the rock singer, whom many Moral Guardians saw as a "corruptor of youth". Manson felt demonized by the media and refused all interviews, even to defend himself, because he didn't want to contribute to the media frenzy. Instead he made Holy Wood a Concept Album. The songs criticized journalists, politicians and religious groups for capitalizing on the tragic shootings, while at the same time sensationalizing violence, like the assassinations of John F. Kennedy, John Lennon and the Columbine murders. He also argued that glorifying bloodshed was nothing new, because Christians had made Jesus's crucifixion an icon for centuries.

Still, at the time Holy Wood didn't sell as well as his other albums. However, a mere decade later it has been Vindicated by History so much that it is now, in fact, the best-selling album in Manson's catalogue!